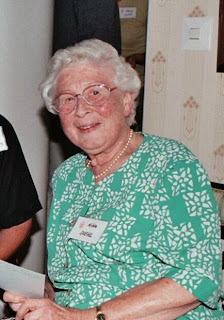 Hilde Diehl died suddenly and peacefully on December 12, 2012. She was admitted to hospital in the afternoon and died a few hours later.  The funeral took place Tuesday December 18, 2012. According to her wishes only the closest relatives were present.  She is survived by her sister Elisabeth Diehl, her nephew Alfred Häuser and many extended family members.

Hilde was born Hildegard Anna Margarethe Diehl on 9 July 1922 in Butzbach Germany.  Her parents were Jakob and Lina (nee Schraub) Diehl.  She was the youngest of three sisters and never married.    She worked as a bookkeeper and was an avid genealogy researcher.  In her later years she lived with her sister Elisabeth in Butzbach.

In June 2005 she traveled to Helsinki Finland to meet family she had been seeking for many years.  She was a surprise guest at the first Diehl Family Gathering hosted by Franciska Diehl Sundholm.  We celebrated her 83rd birthday at the gathering.  Her nephew Alfred and his wife, Inge, had accompanied her to the event.  In 2007 most of those same relatives visited her in Butzbach for a Family Gathering.   On July 9, 2012 she celebrated her 90th birthday in Butzbach, Germany with family.  She was in relative good health although she suffered from arthritis for many years.

Posted by Your Cousin Caron at 10:19 PM No comments: 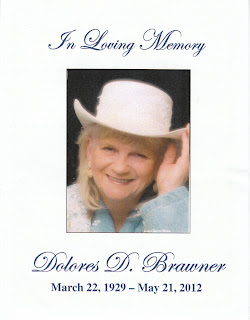 We learned that Delores  “Dee” Brawner, nee Delores Daisy Diehl, suffered a heart attack on May 17 and passed away on May 21, 2012.  A note was received from her daughter Theresa informing us of her mother’s passing.

Dee was born March 22, 1929, the daughter of Frank Diehl and Catherine "Kate" Harkey who preceded her in death, as did her brother John "Jack" Diehl.  The obituary is posted with further details on her family.

Posted by Your Cousin Caron at 9:47 PM No comments: